What follows are my (several hours old) recollections of the show, and I may well have included inaccuracies or misunderstood what was said. These are just my personal impressions, rather than an analytical breakdown of the event. With that in mind, I hope you enjoy it.

Fortunately for me, the city of Bath is only a short journey from my home, so there was no way I was going to miss it. I stopped off in Bath to do a little shopping, bought a depressingly warm Double Whopper, and made my way to the show at the Rockery, a mile or two away.

When I arrived there was one space left in the car park which I quickly consigned to history, before making my way down the slippery steps, through the undergrowth, to the little hall where Amigans were still gathering.

After paying my two pounds fifty pence I surveyed the location with the tactical eye of a seasoned PowerMonger player. After establishing the bar's location (I get thirsty, okay?) I recognised a few familiar faces. Fleecy Moss was chatting nearby, Mick Sutton was behind a stand with other SEAL stalwarts, and Mikey Carrillo (Senior Total Amiga Marketing Officer) came over to say hello.

Although initially the place didn't look particuarly big, I noticed a smaller hall leading off the main area, with a conference room beyond that. I stepped into the smaller hall and found Alan Redhouse busily setting up his stand. The main feature in Alan's display consisted of two computer monitors at either end of a table with something like an opened DVD player in between.

I greeted Alan and asked him what I was looking at. I can't recall exactly how he explained it, my inadequate technical skills were struggling to keep up, and actually running about a sentence and a half behind him - what it must be to have a realtime Operating system.... Anyway, as I understood it, on the left was a standard pc running Windows XP, on the right was an AmigaOne running Linux, accessing the pc via a client arrangement and running the pc's software on its own screen. At the time it was running XP's mediaplayer, and later I think it was showing a Lara Croft DVD. 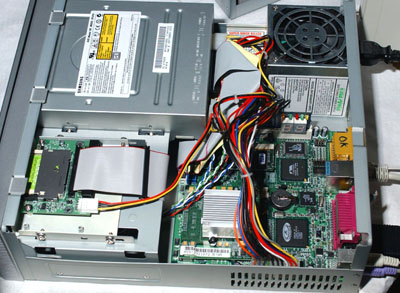 Here is a picture of the connectors on the rear of the DVD style unit. (Alan is holding this in the picture of him, below.) 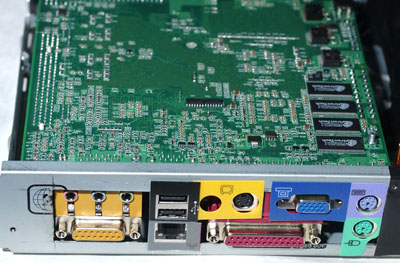 I asked Alan if he'd mind me taking a quick portrait shot for my web report, but quite understood if that wasn't on. He said it was fine, but he needed to finish setting up, and then get a cup of tea. So while he did that I wandered into the conference area where Fleecy Moss was chatting to Mikey Carrillo and a couple of other guys.

Fleecy was talking about the general Amiga position, including the legal situation, I think, and I was immediately impressed by his manner and his straightforward and pleasant personality. He agreed to let me take a portrait, and I chose the natural stonework of the conference area as a background. Fleecy had assumed I was going to do something clever, like bounce the flash off the projection screen, but I thought, he's a busy guy, I'll make it quick and keep it simple. Point the flash gun at the subject, BANG! We wondered about an Amiga type prop for inclusion, and Mikey Carrillo saved the day, by suggesting (spookily) the latest copy of Total Amiga magazine. Fleecy was quite impressed by my camera, a Nikon D1X, and we talked resolutions, digital versus film, and he mentioned how much he had enjoyed working with Black and White material. 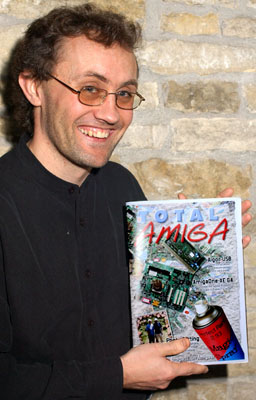 "So about that review, Fleecy?"

I thanked him, and went off to pursue Mr Redhouse. Alan consented to holding a pre-production Micro-A1, and, at his own suggestion, cleverly stood in such a way as to obscure the wintel machine behind him. 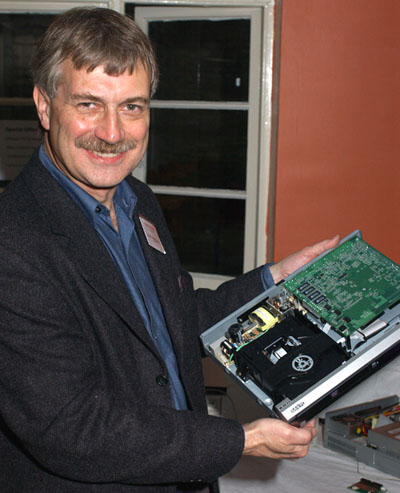 800 986 I wandered back into the main area and strolled across to the Foremat stand. They had numerous CDs, including Aminet archives, Clickboom games and older CD32 offerings. There was also a collection of interesting oddities, cables joysticks and a rather nice looking trackball. I finally bought a copy of Clickboom's shoot-em-up, T-Zero.

Next door was the SEAL team and Mick Sutton was displaying a newly upgraded OS4.0 on his AmigaOne. 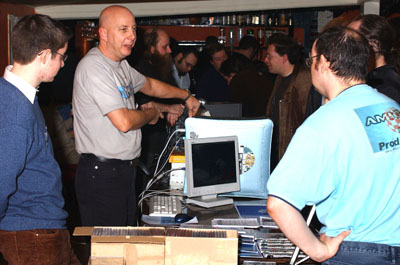 He was running Quake 2 in a window, and instead of using software rendering it was using the just written hardware render driver on Mick's Voodoo 3 card. Suffice to say, I can't see how you would need the game to run any faster. 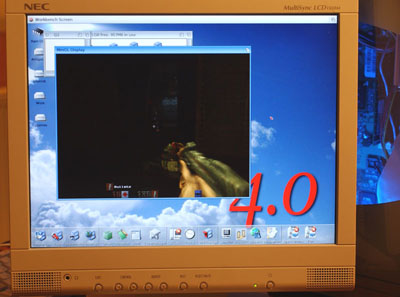 It flew. I've met Mick at various Amiga shows, and always found him to be likeable, knowlegable and helpful. He allowed me to have a little fiddle around with OS.4.0 (and I didn't delete anything) but then he took the driving seat and showed me a couple of things. Mick feels (quite strongly) that "these people" who whinge on about not wanting windows that will drag off-screen, or don't like the default settings of the OS4.0 Workbench should consider looking at the preferences and setting the system to their own taste. Its simple! He demonstrated how easy it was by selecting the style of pull-down menus. He changed them to having a colour background, set the start colour (a deep red) and the end colour (a bold blue) which created a psychedelic graduation effect, he then rotated the effect to 42 degrees (Mick was going to select 46, but I insisted on 42) and finally set the effect to transparent. Bingo! A unique menu effect, and I gather the rest is just as configurable.

Mick showed us Quake 1, which didn't have the advantage of hardware rendering, but nevertheless looked very impressive. He also accessed his e-mail in Simplemail running under 68K emulation, which he felt currently runs at a lower end 040 speed, but when JIT is applied it should increase speed dramatically.

Eyetech now have Stellar Dreams actually selling the AmigaOne, and I chatted to Sven Harvey and his charming mother (she doesn't look old enough) about the situation. While we were talking Alan Redhouse came across and deposited three or four AmigaOne mother boards on the table. We agreed that if business picks up the way we hope it does, he should consider getting a lorry, and saving his legs.

Sven was selling an A1 tower system for 900 pounds, which I must admit (with OS4.0 running a few yards away) did look quite tempting.

We moved into the conference area and Alan gave us a presentation chatting about the general situation, and anticipating some of the queries people had about the A1. It was good stuff, but sitting at the back I couldn't make all of it out, but here are some of the things he mentioned. He felt it was likely that OS4.0 beta would be available for a limited number of users for Christmas, he said it would not be distributed on CD, but would be downloadable. He thought a finished, boxed version would not be available before the first quarter of 04, it would take 6 weeks just to get it ready once it was finished. He was very impressed with OS4.0 and the Hyperion team. As I understand it he said that a given application running on OS.4.0 would run 4 times faster than on the same processor using Linux. That meant that you could have a processor running at half the clock speed, and the application would still run twice as fast. He also said it was a very desirable thing to have Amiga Inc involved in the process. One point that stuck in my mind was Alan said that people had made it fairly clear that they preferred an expandable, customisable A1, and this was the way Eyetech were going, although he still thought the original model was a very nice board.

Alan offered to run through the presentation he had recently given in China, and this was warmly agreed to. He explained that a Micro A1 could perform all sorts of functions not only as a desktop computer but for large corporations who were currently using pc hardware as servers. The savings in electricity for a large company with say 60 servers were pretty staggering, not just because of their 86 cpu's, but also the required cooling.

Unfortunately, the Hyperion representative was unable to attend so I have nothing to report from them.

In general it was a very enjoyable show, with a good atmosphere and plenty of bustle. I arrived close to 1.00 pm and it remained busy from then until the after 5.00 pm, when the stalls began to close. It would have been brilliant if Hyperion had made it too, but they are clearly very busy, and happily productive too.

The show organizer, Peter Gordon (along with Mark Spearing) of the South West Amiga Group, had the very latest version of OS4.0, and I asked him for his impressions, but having only been in possession of it for 3 hours he wasn't really able to comment as he'd understandably had his hands full.

Thanks guys, it was a great show.

back to the AGDB main page.